My Medical White Whale: Finding a Hospital Where Doctors Love to Work and Would Recommend to Colleagues

My Medical White Whale: Finding a Hospital Where Doctors Love to Work and Would Recommend to Colleagues 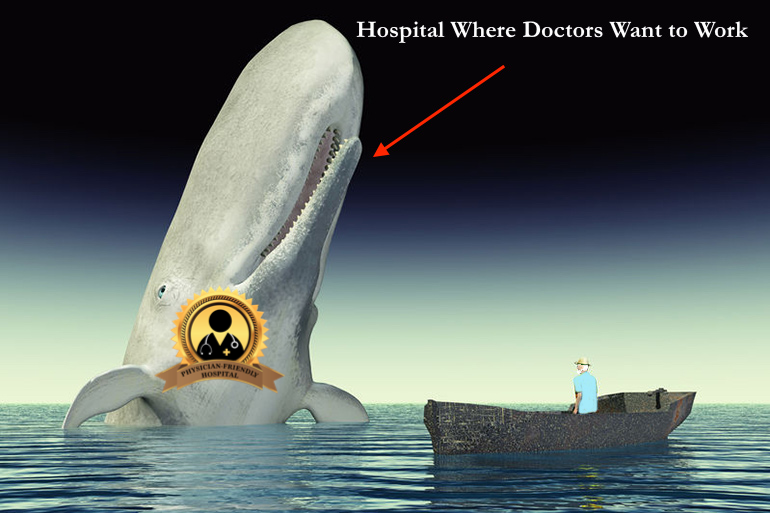 I am a physician and retired from clinical practice.  My happiest times were very early in my employed career and then my last six years doing Direct Primary Care.   I thoroughly discussed the former in my book The Hospital Guide to Physician Retention: Why Creating A Physician-Friendly Environment Is Critical For Your Organization’s Success. It was a place where the physician community was close-knit in a medium-sized town in Maine.  We knew each other.  We were friends.  We went to events together, and we even hung out in the Physician’s Lounge together.  The administrators listened to us and valued us as physicians. We were so content there that we ended up recruiting 8 other family doctors we knew from residency.  Then things changed.

Unfortunately, it’s been a long time since I saw a cohesive physician community.  I remember almost taking a job for a large family physician-owned group at one point, but the feeling wasn’t there.  There were four doctors in our office and none of us talked to each other.  We maybe nodded when we saw one another. Or not.  This contrasted with when I worked in Maine with three great friends where we did lunch and 3 PM coffee every day.  Things were different.

Direct Primary Care solved almost all of my problems with practicing medicine.  I didn’t deal with insurance companies, accounts receivables, coding, and administrators.   I was my own boss with nothing between my patients and me. DPC, however, can be a solitary sport and I didn’t have the colleagues with me to commiserate or laugh with.  Nonetheless, it was a great move.

I have written three books to help out other potential DPC doctors and I feel good about what I have done for the movement.  That being said, I have always felt bad about leaving my peers who were employed by others, that being hospitals and other big organizations.  They were burning out hard and many were quitting or even hurting themselves in different ways.  This is why I wrote my book on Physician Retention.

Recently, I was on a “This Just In” radio show where the interviewer, Justin Barnes, asked me to talk about the good hospitals I came across in my research.  I couldn’t answer immediately.  Why? Well, for one, I had done my research for the book for over ten years.  When I first put out surveys to doctors, there were only a few docs who told me of great hospitals to work for.  What people don’t know is that CEOs and hospital administrators change very quickly in today’s landscape.  I didn’t really feel comfortable giving names of places that may no longer have great environments. So, I decided to try again.   That’s where this adventure began.

It is NOT easy to find enough doctors to discover the WHITE WHALE OF MEDICINE. You need connections. Luckily, through my blog of 20 years and my connections on social media, I have some but that is still definitely a limiting factor.  There are many more.  I couldn’t trust the awards given out to hospitals as “Great Places to Work.” The number of docs, who respond to give those awards, are few and far between.  They usually use indicators that mean nothing if you, as a doctor who works there, want to recommend the place to other colleagues.  For example, HCA in North Carolina is ranked number 7 in that state, but a recent article showed a massive exodus of physicians from that system. What does that tell you?

How about the physician turnover rate?  I have seen that average to be about 2%, but again, that means nothing.  The hospitals give those numbers out themselves and they lie.  One system I worked for, an urgent care chain, claimed they had this same average, and yet I saw one local clinic go through eighty doctors in a year. Eighty!

The only legitimate number, in my opinion, would be the eNPS®  score, which asks the question, “On a scale of zero to ten, how likely is it that you would recommend this hospital to a colleague to come work here?”  We can talk about why that is the perfect survey, but it would be too lengthy for a discussion here.  I would recommend you go to this link to learn more.

This leads me to my adventure on the high seas of social media.  The only place I could ask doctors about a great hospital environment was LinkedIn, Twitter, and Facebook.  Here was the question I posed just to get some leads:

Does anyone know of a great hospital system to work for? A place where you are valued by the administrators? Where the pay is good, Doctor’s Day is celebrated, and they still have a Doctor’s Lounge? A place where there is a solid physician community and doctors don’t want to leave? I am researching this topic to find the best places to work for physicians. I don’t care about the phony awards that some hospitals receive. I want to know what the doctors, who are actually working there, think.

This question went out to all the physician groups that are on FB.  That was a total of 32235 members.  Before I give you the results, let me fess up about why what I did is not an official study due to the confounding variables. For one, 32K docs is a small fraction of the 900K docs out there.  Many of the 32K were also in the same groups I questioned, so there were duplications.  Also, doctors are poor responders to any question posed to them.   My question itself leads to a bias in the answers. Lastly of the “good responses”, a few were offered by medical directors.  I have found that those docs are biased.  I have seen that over and over again in my career.  Were those directors who answered biased?  I have no idea.

So, here are the results.  Only 17 hospitals or hospital systems were mentioned to me as great places to work. This does not count the responses such as Xanadu, Utopia, Fantasy Island, Valhalla, and Twilight Zone. Those places are not real, but I think those doctors know that.

I have decided NOT to list the names of these places.  Why?  For the same reason that I mentioned above. To me, only the eNPS® score is valid.  An N of 1 probably means very little.  It is a starting point, though, and my future goal is to investigate these places more thoroughly and hopefully get them to allow me to give their doctors an eNPS®  survey.  What I will offer you are some of the comments I received.  Here they are:

Let me sum this up.   The best places had these traits:

Did I find my medical white whale?  Not yet.  Remember, there are 6000 hospitals out there.   It seems like some of them are doing things right.  I didn’t mention all those doctors who responded to me by wanting to know the answer so they can go there and work.  What does that tell you?  When hospitals do the right things, they don’t have to worry as much about recruitment because doctors will want to stay there.

I was pleasantly surprised by these answers.  Why?  I had put all this in my book.  It’s all there in writing.  It’s the same thing over and over again.  Doctors are human and are consistent in their needs. The game plan is available.  All these hospitals need to do is follow it.

Contact me if you want to talk more about this. Dougfarrago at gmail.com.