The Death of Physician Camaraderie in Three Easy Steps

The Death of Physician Camaraderie in Three Easy Steps 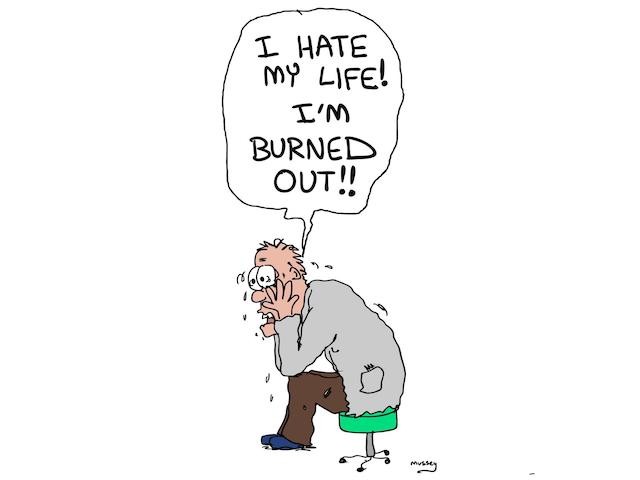 The following is from Steven Mussey, MD, who illustrated my recent book on Physician Retention. I think he really nails how doctors are feeling. Feel free to share.

What happened? How did we get here?

Doug’s book discusses the problem of physician retention. He sadly describes the loss of physician camaraderie. Increasingly, hospitals appear confrontational to the interests of the doctors. We miss the days of doctors talking in the physician lounge, discussing stories, experiences, and frustrations of the day.

Now we all practice in our own little boxes. We no longer mingle with each other. Many of us haven’t set foot in the hospital for years. Things have changed. We feel more alone. The situation feels perfectly designed to create burn-out.

When you step back, the changes are remarkable.

More than three decades ago, when I practiced General Internal Medicine, life was different. Hospital stays were often better measured in weeks rather than hours. Procedures and surgeries were all done physically in the hospital. We all rounded on our patients in the morning and only rounded again in the evening on our sickest patients. We admitted our own patients, day and night. Our office practices had fewer patients per hour. If needed, we could urgently dash from our offices, which usually sat just blocks from the hospital, handle matters and then return to the office with apologies to the patients left waiting. It was certainly not optimal, but it was doable. We saw all of our colleagues in the hospital. We knew all of the hospital administrators. The physician lounge was always occupied.

In the old days, Community Acquired Pneumonia was treated with IV antibiotics, Chest PT and, this is the amazing part, UP TO THREE WEEKS in the hospital (the Medicare DRG in 1985 was 21 days). Same thing with strokes, where all of the rehab, PT/OT, etc. was done in the hospital, rather than in a skilled nursing facility. Major surgery patients always stayed for weeks, rather than hours or days.

Now, most hospital stays are better measured in hours. This happened slowly. It was a year to year evolution. The result was a change in pace. You could no longer get away, as a physician, rounding on the patient only once or, maybe, twice a day. You had to see the patient and make major changes several times a day. Often, you had to move quickly in the afternoon to rush to the hospital to arrange unexpected discharges. Hospital care became more exhausting. Outpatient care became more disrupted.

Meanwhile, step two happened: Outpatient practice turned insane. Every visit became more complex. When hospital care is abbreviated, there are many loose ends. Office visits now had to focus on finding and cleaning up unaddressed issues. EMR added to the workload. The pace of outpatient care accelerated. Support staffing needs increased. Prior authorization is needed for almost every study and medication. Reimbursement actually dropped. The economics of outpatient practice became irrefutable. If you did not see more patients in a day, you could not pay your overhead. It was very simple. Meanwhile, the frequent pages from the hospital made it impossible to see a single patient without multiple interruptions.

If you had a rough night on call in the hospital, you typically took off all or half of the next day to recover. Soon, that loss of productivity became unacceptable. So, you stumbled through the next day. Yet, sleep deprivation cannot continue forever.

Then, step three happened and we welcomed it with open arms: Hospitalists became a thing.

For those of us trying to cover both the outpatient and inpatient world up to this point, we knew we were flirting with serious danger. The level of sickness in both the outpatient and inpatient realms accelerated rapidly. We were forced to manage patients with higher levels of sickness in the outpatient world. If patients did get sick enough to be admitted, they had to be handled rapidly, with a discharge in less than 48 to 72 hours. To put it simply, one person cannot be in two places at once.

Having hospitalists available 24/7 provided coverage for this. It allowed us to choose which realm was our focus. When this finally became a real entity, many of us were astonished at our feelings of relief.

But, there were problems. The obvious ones were issues of patient care continuity. This bumped up patient hostility.

The other problem was far sneakier: We stopped seeing our colleagues on a regular basis. In fact, we barely saw more than a couple of doctors in person over the course of a single month. I vividly recall a special hospital meeting a few years ago. I had not been to a hospital meeting in many years. This meeting made it clear how much time had passed. The common comment made to me by my colleagues was: “You sure got gray!!!” Yep, they were right! A lot of time had passed. We all looked really old and those were the handful of old colleagues still on staff that I knew. Most of the people were strangers.

We are now divided up into our own little spaces, rarely interacting with each other. This is horrible. Who do I see to gripe about the affairs of the world? Who will I talk to when I’m not feeling so good about my life or my practice?

The camaraderie is gone and I don’t know how to get it back.